Did you know that…cosmetic products have their own language?

Ever wondered why your Canadian-bought shampoo and the likes have ingredient lists mixing up Latin, English and French (ex.: “aqua/water/eau, alcohol, parfum…”)?

The answer is simple:

While the government of Canada considers it to be “multi-lingual and based on Latin” (hence the use of words like “aqua”, “parfum”, etc.), INCI names are still managed by a U.S.-based organization (hence the dominant use of English).

There are however some exceptions:

– in all three languages  (“aqua /water/eau”)… although this is definitely not the most space-efficient option.

Bottom line is, whenever you have a cosmetic product packaging to translate, you should first make sure that every ingredient listed complies with the Canadian regulations requirements.

After all, since the INCI-based list is deemed to be “multilingual”, the translators should not even have to touch it, unless you ask otherwise! 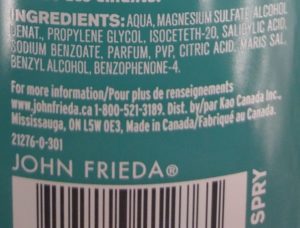 Colourings may pose an additional challenge: sometimes, different INCI names can in fact refer to one same ingredient. For instance, in INCI terminology, one colouring is called “Acid Blue 9” as its Colour Index™ Generic Name (CIGN), while the same ingredient is called “CI 42090” when referring to the Colour Index™ Constitution Number (CICN), and it can also be called “Blue 1” with regards to the United States’ FD&C number… notwithstanding many non-INCI names, including “Blue 4” and “Brilliant Blue FCF” – all for the very same ingredient!

In such cases, the Canadian Guide to Cosmetic Ingredient Labelling, states that “it must be clear if both are listed that they are the same ingredient and not separate ingredients. For example: CI 42090 (Blue 1)”.

And of course, whatever the colour name, you should first make sure it is indeed an INCI one.

“Some products can have a dual purpose and, as a result, will fall under more than one piece of legislation simultaneously. An example of such a product would be a chewing gum that claims to whiten the teeth. Under the Food and Drugs Act, a chewing gum is a food, but it must also adhere to the requirements of the Cosmetic Regulations because it also makes cosmetic claims (to whiten teeth).

Because many of these dually-classified products already require ingredient listing under other Regulations, the decision was made to exempt them from the provision to list the ingredients using the INCI system.

Therefore, the requirements to list the ingredients under the Cosmetic Regulations do not apply to any product whose ingredient labelling is regulated under the Food and Drug Regulations or the Natural Health Product Regulations.”

About the Author: Louis LaBonté

Louis is a certified translator and LAT's senior terminologist. His passion for words goes far beyond simple translation, and he can always be counted on to find the right word, expression, or turn of phrase. Born and raised in the beautiful city of Québec, he has a Bachelor’s degree in Translation and a Journalism certificate from Laval University. In his spare time, Louis is all about family, friends and the great outdoors. He also loves learning about almost anything, ranging from food and biology to the humanities and astrophysics, especially with his school-age children. As they say, if you can find the right words for even a five-year old to understand, you can definitely make it clear for anyone!
STAY IN TOUCH
RSS
SUBSCRIBE