From Shakespeare to Social Media

The droughte of March hath perced to the rote.”

…Right. If you’re not up on your Middle English the opening lines of Geoffrey Chaucer’s The Canterbury Tales might leave you wanting a modern-day English translation, but the language is far from unrecognizable. What if we jump ahead a few centuries to see where it takes us…

“Shall I compare thee to a summer’s day?

Rough winds do shake the darling buds of May,

And summer’s lease hath all too short a date:”

…Getting better. The famous beginning to Shakespeare’s “Sonnet 18” may be more clear than Chaucer’s Middle English, but still not quite like the language we all know and love today. A lot has changed since Shakespeare, and even more so since Chaucer, but its origins go much further back.

Germanic invaders brought their Anglo-Frisian dialects to Great Britian, replacing Latin and the Brythonic languages that were previously in place. However, Latin made a comeback, returning to England through the Celtic and Roman church missionaries. As Christianity grew in influence, Latin became even more influential within the English language. Other dialects, such as Old Norse German languages also contributed words. These dialects would mix and the resulting language became what is now known as “Old English”, and it was around from the mid-5th century until the mid-11th century. The most famous literary work from the time period is probably the epic poem “Beowulf”, which is still translated and read around the world today. 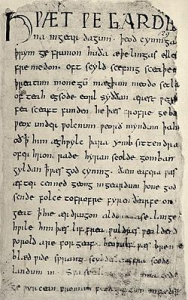 Things took a different turn in 1066 when the Normans came and conquered England. Now English was being spoken alongside the French language of the Normans called Anglo-Norman. Merchants and lower-ranked nobles became bilingual, but English was still the common language of the people. It was during this time that French had a huge influence on the English language that can still be seen today. Celtic dialects also continued to influence, as well as Old Norman. The increased integration of Norman languages into English significantly changed its linguistic structure; thus Old English transformed into Middle English. As Anglo-Norman declined, English remained popular. Chaucer is the most famous Middle English author, penning such works as the aforementioned The Canterbury Tales. 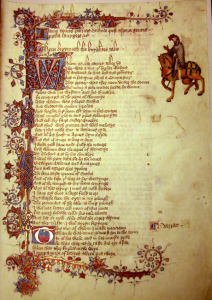 The late 15th century saw the end of Middle English, and the emergence of Early Modern English. However, unlike the previous shift from Old to Middle English, the new changes were based on sound rather than spelling. This change in speech that occurred between approximately 1350 and 1700 is referred to as the “Great Vowel Shift”. Governments tried to establish a standarized London-based dialect in England, which led to the development of terms such as “accent” and “dialect”. This was the time of Shakespeare, who wrote in the mid-16th to 17th century, and the dictionary, which was first published in 1604. 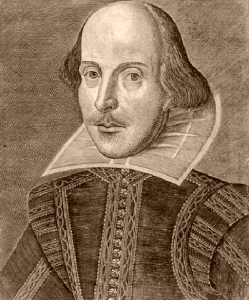 Between Early Modern English and Modern English, the changes are seen in the vocabulary. The Industrial Revolution brought about the need for language and descriptions that weren’t necessary before. As the British Empire set about colonizing the world, English picked up words from all the different languages it acquired. Today, the English language adapts to many regions, such as: Britain, America, Australia and India. Effective communication requires localization for each different region it reaches.

Just because we’ve reached the Modern day, doesn’t mean we stop here! Just like the Industrial Revolution had a huge influence on bringing about change, todays language continues to be influenced by technological advances. This time it is digital technology bringing about this change. Since the birth of computers and the internet, digital communication has changed the way we use and think about language. Besides the creation of actual vocabulary surrounding technology, the methods of communication are changing as well. The two biggest ways in which we see these changes are in cell phones and social media, and now with the popularity of the smartphone I am going to combine these two factors and focus solely on social media.

The stunning popularity of sites such as Facebook, YouTube, and Twitter cannot be denied. They are not only changing the ways we interact, but the way in which we use language. Scroll through any Facebook news feed and you will see your fair share of LOLs and OMGs, a far cry from the “The droughte of March hath perced to the rote” of Chaucer or the “Thou art more lovely and more temperate” of Shakespeare. However, this new form of shorthand is perfectly understandable to a new generation that has grown up on technology. In a world where expresssion is limited to 140 characters or less, people are learning to adapt their language to fit the current times. 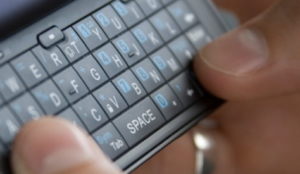 It’s not just English undergoing these changes either, because anything digital has the potential to be on a global platform, all languages must be adapting to the new changes that are arising. As more and more people and businesses are turning to social media, it is becoming essential to expand your digitized messages beyond one single language. Multilingual social media is the ultimate way to connect with a global audience.

So it would appear that English has come a long way these past centuries, and it is continuing to change and evolve today. The digital world is fundamentally altering the way we communicate, and could it be that we are reaching the point where English is evolving to a point beyond itself? It is no longer feasible for one language to dominate, as social media increases global interconnectivity it would appear that any message that wants spreading needs to be multilingual. Shakespeare wrote “All the world’s a stage” and social media is making this truer than ever. This means that it is no longer enough to have something in the most modern up-to-date English. You now need the multilingual translations as well if your message wants to be understood on a global platform.

Even if you are only communicating in one language, doing this effectively requires proper localization. Translation companies, such as LAT, make it easy to access experienced translators living in your target markets. If you are ready to get involved in multilingual communication, we can help take you to the next level. We have the experience necessary to spread your message in a way that will be understood.