When debuting their mini program, WeChat took the approach of “welcome and refuse.” Contrary to this ambiguous approach, Alipay has opened multiple access channels. Users can find and access mini programs through the following methods: 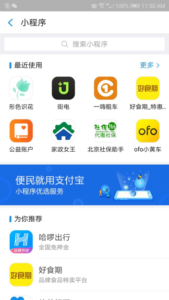 In addition to these access channels, once users use mini programs, these programs can be easily found under the Alipay “friends” tab.

Because of its 2B achievement within the aforementioned industries, Ant Financial has its own accumulated advantages. At its core, Alipay supports B-side merchants by combining related businesses, technologies, and product logic.

Among the four, a huge advantage of the Alipay ecosystem is its credibility, especially when compared with WeChat payment and its mini programs. Alipay allows users to pay deposits online, in wide-ranging industries such as travel, hospitality, and transportation. Business owners should consider creating a presence on Alipay to facilitate the payment process and drive traffic to their businesses. 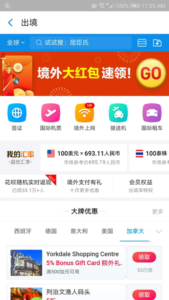 To see this in action, let’s take a look at Ofo, a Chinese-based bicycle sharing company using the Alipay mini program. Ofo integrates QR code scanning, real-name authentication, user credibility, and insurance within its Ali-ecosystem. In fact, the number of newly acquired users has increased by 6 times since the launch of Ofo’s Alipay mini program. And, that was only 4 months ago.

Since launching, the Alipay mini program has not reached the wide range of industries that the WeChat mini program has. Instead, Alipay has focused on the industries and enterprises that it has previously collaborated with. This is especially evident in the travel industry, which is highly tied up with its Sesame Credibility system. While creating successful mini program cases, Alipay is simultaneously improving its products, technologies and services, further expanding into other sectors and industries.

Both Alipay and WeChat have turned to utilizing offline traffic as their main strategy. The creator of WeChat, Zhang Xiaolong, developed a feature to drive O2O traffic through conveniently scanning QR codes of corresponding merchants’ official accounts. However, offline traffic didn’t pick up until WeChat released the “nearby mini program” function in its search tool.

Compared with WeChat, Alipay has no clear advantage in gaining traffic, but it has accumulated a large number of offline merchants through word of mouth references over the past years. Ultimately, Alipay’s client base in B-side may become its winning factor when expanding to merchants. Alibaba is also more experienced than WeChat in providing a complete business solution for business merchants.

At the moment, WeChat’s social and content marketing is superior to Alipay’s. Ant Financial has stated that the Alipay mini-program will gradually open up to more industries in the future, but will not involve social media and content.

In addition to this, WeChat has moved into Ali’s territory- e-commerce- with its mini program. Many brands have begun to use mini programs to launch their own e-commerce storefronts, such as DFS and JD. “E-commerce is one of the key direction that WeChat has been trying to do in recent times,” said a close affiliate of the WeChat team. In addition, Tencent has just launched its own credit system for QQ members, paving the way forward for e-commerce.

Today, Alipay and WeChat are neck and neck. WeChat is likely to leverage its initiative and strong social networks in order to reach a much wider audience. In the meantime, Alipay will make gains with its word of mouth advantage and ability to provide complete business solutions to offline merchants.

What does this mean for business owners? Forget choosing between Alipay and WeChat mini programs. Your best choice is to utilize both for your business.

Here are the main features of WeChat mini programs:

About the Author: Chris Zhao

Chris is a writer at LAT Multilingual.
STAY IN TOUCH
RSS
SUBSCRIBE