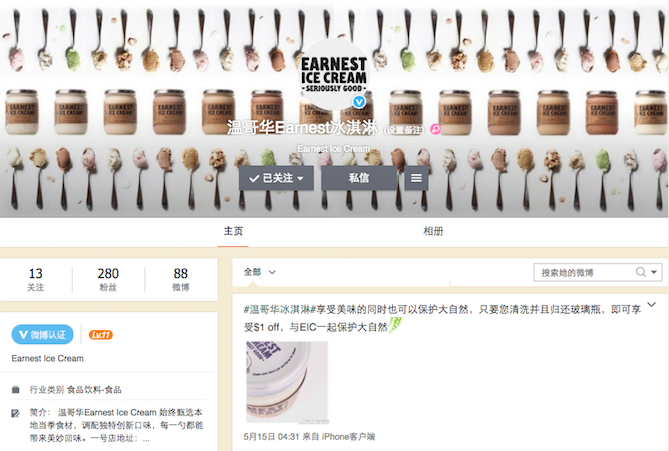 Earnest Ice Cream is a popular Vancouver-based ice cream brand. The brand had a huge offline following by Vancouver’s Chinese community and wanted an organic strategy to further that engagement online. After learning more about the Sina Weibo Chinese social media platform, Earnest Ice Cream realized that having an official presence on Sina Weibo would be a great way for them to enhance brand awareness and engage with their current customers. Additionally, EIC wanted to communicate their corporate values, particularly their recycling program and environmental commitments, through this new channel. They came to LAT for a budget-friendly strategy that would connect to their pre-existing fan base on Sina Weibo.

We created a Weibo account for Earnest Ice Cream and managed their interaction with the local Chinese community in Vancouver. We focused on two key strategies to grow their online followers:

Just as with search engines such as Google, Sina Weibo gives greater visibility to optimized content. We posting engaging and curated content to Earnest Ice Cream’s Weibo page, and hosting the most-searched relevant hashtag on Weibo to gave Earnest Ice Cream maximum visibility amongst users searching for their product. By enhancing EIC’s Weibo SEO, we ensured that customers could find them quickly and easily.

For Chinese New Year, we created a contest where Weibo users shared their favourite ice cream flavour in return for the opportunity to win a prize. To increase exposure, we reached out to local influencers on Weibo and established a relationship so that the influencers shared the contest on their own pages

Our Chinese New Year contest ran for a week and a half, generating more than 43,000 views and more than doubling Earnest Ice Cream’s follower count. Of those, over 70% of the visitors to Earnest Ice Cream’s Weibo page were based in Vancouver, showing that our strategy helped them effectively reach their target market.

Contact us to learn more about how you can benefit from a Chinese social media marketing strategy.